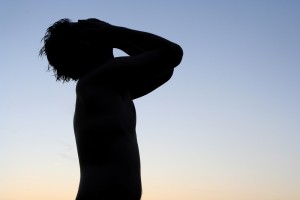 Ken quit school in the tenth grade to work as a messenger boy in the office of a big factory. He was determined to do better than his dad and to provide properly for his family.

He met Megan, and they seemed meant for each other. He was 19 years old and she was 18 when they were married. They both worked hard to furnish a little apartment.

A few months later, Ken went off to war, and three lonely years went by. Ken came back and found Megan waiting for him in their lovely apartment. It was easy to resume their life together.

Megan had come from a close-knit, happy family. Stability and dependability were taken for granted in her life. The war years were good to Ken in that he had learned to be a machinist in the navy. He got a skilled job in the factory where he had worked before the war. Ken did just what he said he would do—provide a proper home for his family.

Ken became foreman of a large milling machine department, responsible for the supervision of more than 100 men. He had 17 years seniority, a good pension plan, prospects for promotion, a home on one of the nicer streets in town, membership in a good church, and a host of Christian friends. Then it happened. His company was having trouble in sales. His department was cut to 15 men. But his boss assured Ken that his job was safe.

Then one day, the boss called Ken into his office and said, “Ken, things don’t look good. In order to economize, we must combine two departments. You still can have a job here if you want to go back to running a machine.”

What a blow! Megan came to the rescue and emphasized that this was not a matter of Ken’s doing a poor job. With her encouragement, he regained his balance and worked hard again at the machine.

Then came another blow: the plant went bankrupt. Along with it went Ken’s job, his seniority, and his pension plan.

Ken was stunned. As he sat in my office, he was a picture of complete dejection. His wife met with me previously and shared their story. She had persuaded him to come, but he had no desire to talk. He was a tough man, and it was pathetic to see an occasional tear run down his cheek.

“That’s easy for you, sitting behind that desk,” Ken retorted when I had finished.

I could say little more to him, but when Ken came for his next appointment, he was a changed man. “I don’t need to see you anymore! You were right. I was good and mad at God, just like Jonah. I have asked God to forgive me and show me the next step. I know He will. What a relief to renew my trust in Him.”

We parted on this note: “Trust in the Lord with all your heart; and lean not unto your own understanding. In all your ways acknowledge Him, and He will direct your paths. Be not wise in your own eyes; fear the Lord, and depart from evil” (Proverbs 3:5-7).

A devoted, dedicated wife, and a sure faith in God led Ken out of his dilemma.