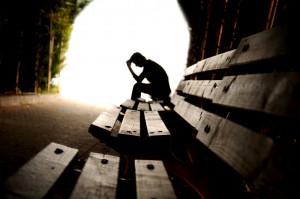 “It’s agonizing. Any gathering of people frightens me. In a traffic jam, I feel like jumping out of the car and running away. I force myself to go to church and sit there with a feeling of suspense. Even a few customers lined up to buy something in my place of business frighten me. I feel trapped.”

The gentleman speaking was a college graduate and successful in business. He went on, “It started when we moved to an apartment. The people below us and beside us were noisy. We could hear their radios. They would drop things. Often another car was in my parking space. Finally, I insisted on moving to our own home. My wife wasn’t bothered at all by these things and she resisted our moving back to a home of our own, so now there is a wall building between us.

“I used to enjoy people. Now I even feel anxious about going out for dinner.”

It is a helpless feeling for a successful businessman to be tormented by vague fears that seemingly have no origin.

We turned together to the Bible to see if there was some help for him. There we found a verse that threw some light on his problem: “There is no fear in love; but perfect love casts out fear: because fear has torment. He that has fear is not made perfect in love” (1 John 4:18).

His problem was not vague, after all. He was an irritable man. His reactions to his neighbors, to his wife, to the man in the parking lot were hostile. Even though he was well educated and successful, his heart was not filled with love. In his effort to ignore his feelings of irritation and anger, he became anxious and convinced himself that his anxiety was caused by being in crowds. Then he became fearful of being in the presence of any people. The more he thought about this, the more fearful he became.

”Do you mean that my problem is not fear, but a lack of love?” he asked. He couldn’t accept this idea. He had always thought of himself as a friendly, congenial person. He left our meeting unbelieving and crushed.

We continued to talk for many weeks. Gradually, he acknowledged that he was an irritable person. He began to realize that there was nothing to fear in the midst of people. Repentantly, he asked the Lord to forgive him and to change his heart. The grace of God and His love took away the fear of saying or doing something that would embarrass him because of his irritations.