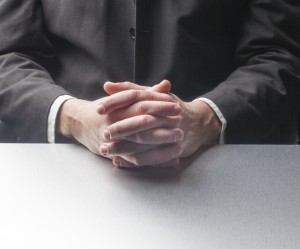 John Morgan was having trouble with the employees in his automobile repair garage. His mechanics would listen politely to an order, then not carry it through.

“Why, I bet I have to tell them three times before they fill out their repair tickets right or turn out a light they’re through using,” he raged.

Mr. Morgan had come to me from a sickbed. Every month or so he had to quit work. His stomach pained him; he was short of breath; he couldn’t eat. He would blow up at the garage and go home.

As we talked, he unburdened himself. Not only did things go wrong in the garage, but at home and at church, too. The baby’s crying upset him. The teachers in his Sunday school department were slow in putting through desired changes.

From his story, I learned that John Morgan never had much confidence in himself. As an expert mechanic working for someone else or in the ranks as a church worker, he had known how things should be done and he did them, to near perfection. When other workers fumbled, he would stew but say nothing. Even when asked for advice, he choked on the words in his throat.

This stemmed from his childhood, it turned out, when his mother and father never asked nor accepted his opinion, and they silenced him when he tried to express one. His conclusion was: “I can’t afford to open my mouth or I’ll get hurt.”

John Morgan saved his money and one day bought the garage. About the same time, the baby came, and he was appointed a departmental superintendent in the Sunday school. Now at work, he had to give orders. At church he had to give directions. His wife expected him to help in the decisions concerning the baby. What he had wanted to do all these years, he had the opportunity for, but no one paid much attention!

I reminded him that as a mechanic, it had been hard for him to do his job someone else’s way, and now it was hard for others to work his way.

Together we worked out a definition of supervision: The enforcement of a standard set by proper authority. Why was supervision necessary? Because people always fall short of the standard. It is human nature to miss the mark. Isaiah said everyone has turned “to his own way.” The psalmist said, “There is none that doeth good, no, not one.”

Supervision wasn’t simple or soon accomplished, but a steady, delicate task. As John Morgan learned and looked to God for patience, his blowups and sick days decreased drastically. And his effectiveness as a leader grew.