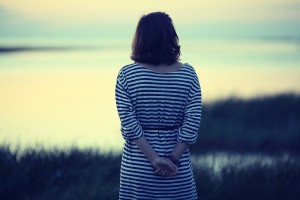 “I’m afraid to even go out anymore,” she confided. “I never know what faux pas I may commit next.”

Her husband had left the pastorate to become a traveling representative for a Christian school. She hadn’t wanted him to make the change, but he did. Now he was away four weeks, home one. She was in a strange city, stuck at home with two children, and, of necessity, carried on a rather heavy social schedule.

“I’m always sticking my foot in my mouth,” she said. “The other day at a faculty wives’ tea I told the wife of one of the professors that she wore the most beautiful dress in the room. I didn’t know that the director of the home economics department stood within earshot. To cover up, I said to her, ‘But for one that’s homemade, your dress is wonderful.'”

Social slips were not all that was worrying Mrs. Ripley. She felt she was being a poor mother.

“When I think, I handle them in the right way, but two-thirds of the time I’m under such stress that they irritate me, and I spank them harder then I should or lash out at them verbally. I ordered my five-year-old to pick up her toys. But she had other ideas. In fury, I spanked her and for the next 15 minutes I scolded her. When I came to my senses, I told her I was sorry.”

Why did Kay panic in a social setting and react violently to her children’s misbehavior? She was actually a cultured, educated woman, competent socially and as a mother.

As we talked, it became clear that she had never forgiven her husband for the change of vocation. She had refused to accept the new way of life forced upon her. She talked about submitting, but she was simply pretending. She hadn’t been able to admit to herself that she was rebelling, and as a result she lashed out at the children and told herself her anxiety was the result of not wanting to make a social mistake.

When the real issue became clear and she admitted it, she followed the simple rule of 1 John 1:9, “If we confess our sins, He is faithful and just to forgive us our sin, and to cleanse us from all unrighteousness.” With that done, she was at peace again. She quieted down and once more was able to apply the wisdom and training that she possessed all along.