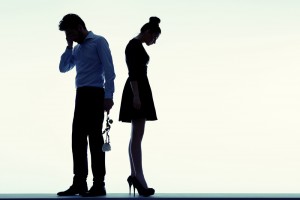 Neither Frank nor Kate Bonner really wanted to break up their home, yet they were heading in that direction–fast!

After 23 years of marriage, Frank had become interested in a younger woman in his office. Kate said she could see why. Kate’s hair was gray, her hands showed the years of housework she had done, her face was lined with the wrinkles of middle age. She was tired much of the time and was subject to frequent and sudden illnesses.

Someone suggested that before they take the fateful step of filing for divorce they ought to seek professional counseling. They agreed, almost against their better judgment.

In the first meeting it was Frank, not the injured Kate, who was depressed. He confessed he had tried suicide once, not seriously, but his mind was running in that direction.

“Time after time I’ve asked Kate to forgive me for my one instance of unfaithfulness,” he said with a sigh. “But she won’t forgive.”

It was clear that she felt greatly offended. Yet not all love for Frank had perished. She wanted to continue their marriage, but did not think there was any way it could be done.

“Frank wants to quit his job in the mortgage firm where he’s worked for 20 years,” she said. “He claims he can start his own business.”

She would not accept the idea. She spoke of how her father had given up a good job to open a meat market, and how competition put him out of business. From then on the family had lived from hand to mouth. “Is this what I’m supposed to go through again?” she asked. “No thanks.”

Frank looked on her refusal to go along as her lack of trust in his ability. For this he almost hated her. “Any wife who loves her husband will give him a chance to prove himself,” he complained. “Kate won’t even give me the chance to prove I’m not cheating on her any more.”

The matter of hatred and being a Christian came up in the second counseling session, when Frank came alone. He stated that he was a born-again believer. “But I’ve been a pretty poor excuse for a Christian,” he said.

“That’s what you have been,” the counselor agreed. “But you don’t need to go on that way.” The counselor then opened the Bible to 1 John 1:9. “Read it,” he said.

“If we confess our sins, He is faithful and just to forgive us our sins, and to cleanse us from all unrighteousness.” Frank Bonner looked up, a half smile on his lips as he read. “That’s simple enough” he said.

Over the next week he came to understand God’s offer of forgiveness. He leveled with God that he had sinned against his wife and that much of their trouble stemmed from his negative attitude toward their marriage. He repented of his past wrongs, and experienced God’s cleansing.

During the next meeting he prayed for God’s grace to be the kind of Christian he ought to be, and that he might love his wife despite her feelings toward him.

Kate Bonner kept the appointment for a meeting separate from her husband’s. The counselor discovered she had come from a home in which the Bible and the church had never been given a hearing. She was reared with a “look out for yourself” philosophy. She had never forgiven her father for the way he treated her mother, or for his ill-conceived move that left the family nearly destitute. She spoke disparagingly of her mother for having a weak character. In fact, Kate never forgave anyone for failing to come up to what she expected of them.

“Why should I forgive Frank,” she asked, “after what he’s done to me?”

If their home was to continue, as she maintained that she wanted it to, the counselor advised that she would have to forgive Frank.

The counselor then discussed the Old Testament account of the unfaithful wife of Hosea.

“What’s that got to do with me?” she demanded. “Frank was in the wrong, not me.”

“That’s true,” said the counselor. “Hosea’s wife was in the wrong, but Hosea forgave her.”  The counselor explained that the prophet’s account depicted an unfaithful nation, which God forgave and restored.

“But you said that happened centuries ago,” Kate said. “What’s that got to do with me?”

“In the Bible, God has included lessons that are relevant in the lives of people today,” the counselor answered. “If a holy God could forgive a disobedient nation of people, can’t we as individuals forgive those who mistreat us?”

This led to a discussion on God’s forgiveness—how God permitted Jesus Christ to bear the guilt of the world’s sin by dying on the cross. In that act of sacrifice, God forgave those who have failed to come up to the high standard that He expects all of us to keep.

“Mrs. Bonner, if you are going to benefit by God’s forgiveness, you must accept it,” the counselor said.

For the first time in her life, Kate felt that perhaps she was in need of forgiveness. She never had claimed to be perfect—but in failing to be perfect, wasn’t there an area in her own life that demanded forgiveness from the One of whose standards she had fallen short?

In the next session she admitted that she was a sinner in need of God’s forgiveness. Quietly, she bowed her head and received Jesus Christ as her Savior.

“Thank you for forgiving me,” she simply said to the Lord.

She then began to enumerate the persons against whom she had held grudges and whom she should forgive.

“There’s Frank of course,” she said as she wiped away a tear.

Although both her parents were dead, she committed to the Lord the harsh feelings she had always held toward them. She readily placed several others under her new broad umbrella of forgiveness.

After 23 years of rocky, turbulent marriage, the Bonners now had a new foundation on which to build a solid relationship—a foundation of love, understanding, and forgiveness.

It was in this spirit that they could, for the first time, sit down and discuss in a rational manner whether or not it was good for Frank to go into business for himself.