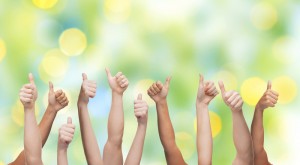 Embarrassing practical jokes, jibes at his youthfulness, and little grins that came to faces because he was the school’s first male music teacher—all this teasing kept up. Word got back to him some of the students and parents were saying he wouldn’t dare subject his piano-playing hands to a real man’s work.

One Friday night, he drove a busload of church kids to a weekend retreat. Three girls sitting near him began to tease him. ”What will your mother say if you get calluses on your hands?” one asked mischievously.

That did it. Fred Baker stopped the bus. In white-hot temper, he lectured the girl for five minutes in front of the other students. He ranted and raved about every injustice he felt he endured from his students. The girl just happened to be the daughter of a school-board member, so it didn’t take Fred long to realize the seriousness of what he had done.

He came to see me during the winter break. Why, he asked, had he exploded? A little more, he said, and he might have hit her.

I encouraged him to sort out his feelings toward himself as well as others. Upon some reflection, he found he had a sense of personal inadequacy. It upset him that some people looked disapprovingly at music as a way for a man to make a living, and because of it, he sometimes had doubts of his manliness. He seemed to show this uncertainty in his performance, and so people did not enjoy his music.

Along with the difficulty of accepting his life work, he was annoyed by people. If the choir did not respond to his direction, or if the young people were disorderly, he got angry. However, he struggled to swallow the jibes and keep his gripes to himself. But swallowing disagreeable situations is not a palatable diet; it made him a surly, scolding, defensive young man, and this spurred on his tormentors.

I had to help him realize his uncertainty over his choice of work. We weighed the pros and cons of music and looked at musicians whom he admired, and he saw that music was an honorable profession. Then it became a matter of committing his work to the Lord so his thoughts concerning it could be established (Proverbs 16:3). He went back to finish the term with a new confidence and optimism. Instead of swallowing the jibes and stewing, he let them bounce off. The teasing diminished and, to his surprise, soon died out.

After Fred began to accept himself for what he was, it became easier for him to accept others. Slowly the relationships with his students and the people at church turned into mutual appreciation. At the end of the semester, he and the school board happily signed a new contract.