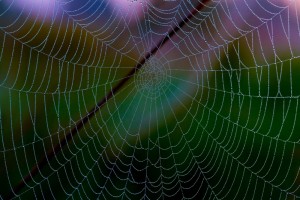 Everything seemed in their favor when George and Ellie got married. He was a research chemist with a good income; they bought a nice house, were active in the church, and popular with their friends. But in a few weeks this young couple was in my office seeking help.

Their story went like this. George came home one night and was greeted as usual in the living room with a tender kiss. But as he held Ellie in his arms, his eyes wandered to a corner of the room and he saw hanging from the ceiling a long, wavy cobweb.

He said nothing about it that night, or the next, but both times while maintaining a pleasant appearance, he said to himself in disgust, “What kind of a woman did I marry that she can’t keep her house clean?”

On the third night he said precisely, “Honey, there’s a cobweb hanging from the ceiling.”

Her response was to kiss him and laugh. “Oh George, dear, I see you’re going to make a good housewife out of me.”

He was relieved. He had won his point and kept her smiling.

But inwardly Ellie was appalled. “How long have his eyes been prying that out of the ceiling?”

George told her gently how she could save time and energy by switching her washing position with the draining position to avoid the long reach-over. Inwardly, George was fuming at the simpleness of a woman who had to be told something so obvious.

However, within Ellie, resentment flared: “Now he tells me how to run my kitchen!”

A few weeks later, deeply disillusioned, the newlyweds came to me.

As we discussed their problems, George said accusingly, “Can’t a man believe what his wife tells him, especially when she’s kissing him?”

Ellie retorted, “Did he have to hide his criticism behind sweet words?”

The quiet manner and tender kisses had been a smoke screen. George and Ellie were doing the right things because they were expected, but they had little meaning. They were living by the letter of the law, which Paul says, in 2 Corinthians 3:6, is deadly: “He has made us competent as ministers of a new covenant—not of the letter but of the Spirit; for the letter kills, but the Spirit gives life.”

George came to see that his problem was not his wife’s housekeeping, but his attitude toward her. Ellie came to acknowledge that her problem was not a critical husband, but her unwillingness to accept criticism. Together they asked God to help them speak the truth, in love, according to Ephesians 4:15: “Speaking the truth in love, we will in all things grow up into Him who is the Head, that is, Christ...” in order to have a sound basis for working out their differences.